By Patrick Boxall
over 4 years ago
10 min read

Sitting on the boot of our rental car, passing around a bottle of pinot and some sandy cheese, we knew we were in a pretty fortunate position. Waves rolled onto shore in front of us and the sun set over the headland to our left. There was only one problem, a little hiccup in our itinerary – we were bogged. Beached as, bro. Up to our axles in soft sand on a deserted beach somewhere on the North Tassie coast.

We were stoked when our mates at Lonely Planet hooked us up with their new Wine Trails book. Let me drop some truths: we love wine. And road trips. And designated drivers. So this was the perfect excuse to get together and head down to the Tamar Valley. 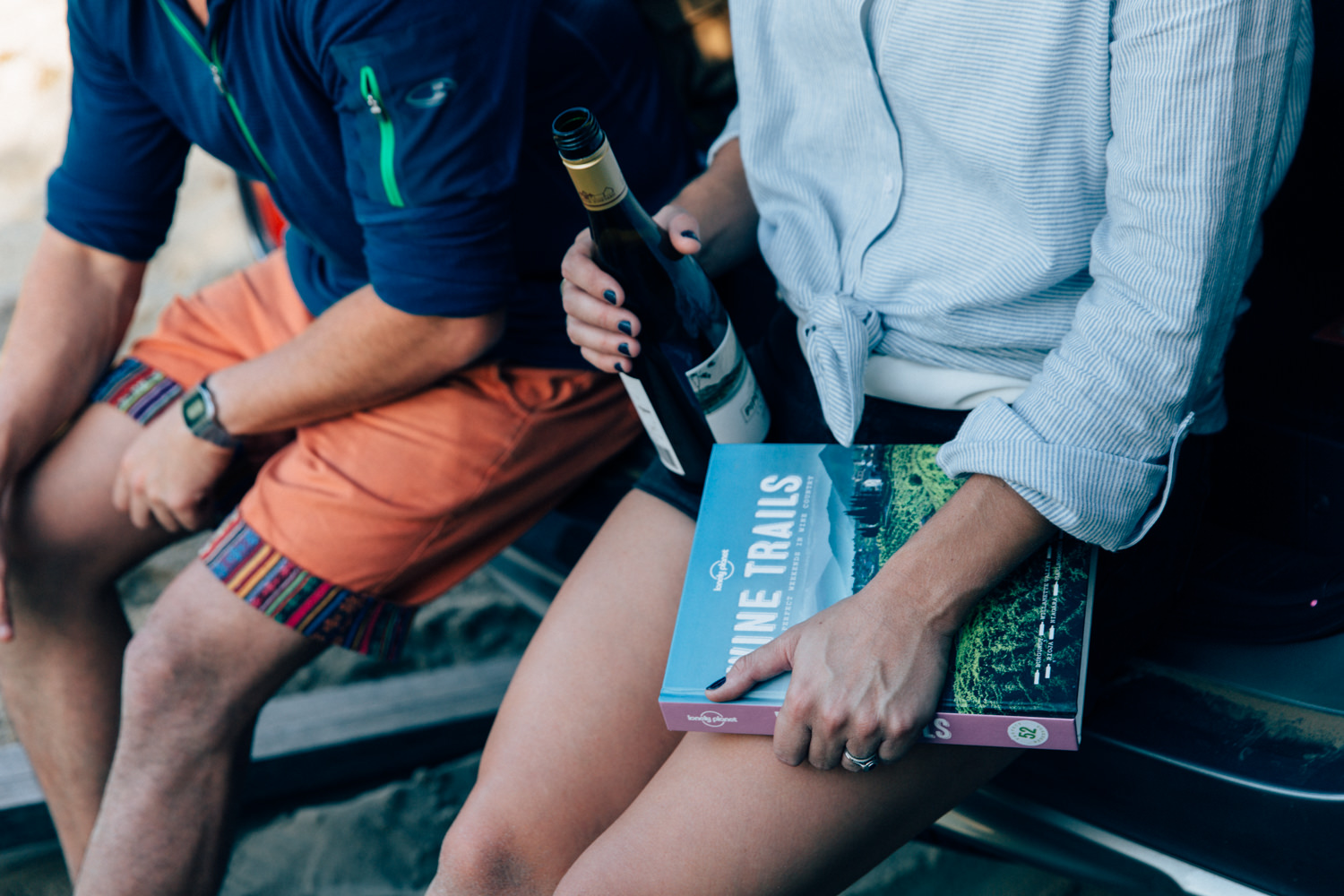 Running from just south of Launceston through to the Southern Ocean, the Tamar is home to a bunch of wineries making some pretty spectacular cool climate vino. The one thing they all have in common? Old fashioned Tassie hospitality. There’s no wank in the wine industry here, just hard work and wonder.

0945: The LoFos stumble at their first hurdle, attempting to set up the back seats of a rental Pajero.

1000: Humbled, the LoFos reluctantly ask for help and are provided with a new vehicle – a ‘Sports’ model – which will later fill the team with a dangerous, and ultimately false, sense of confidence. 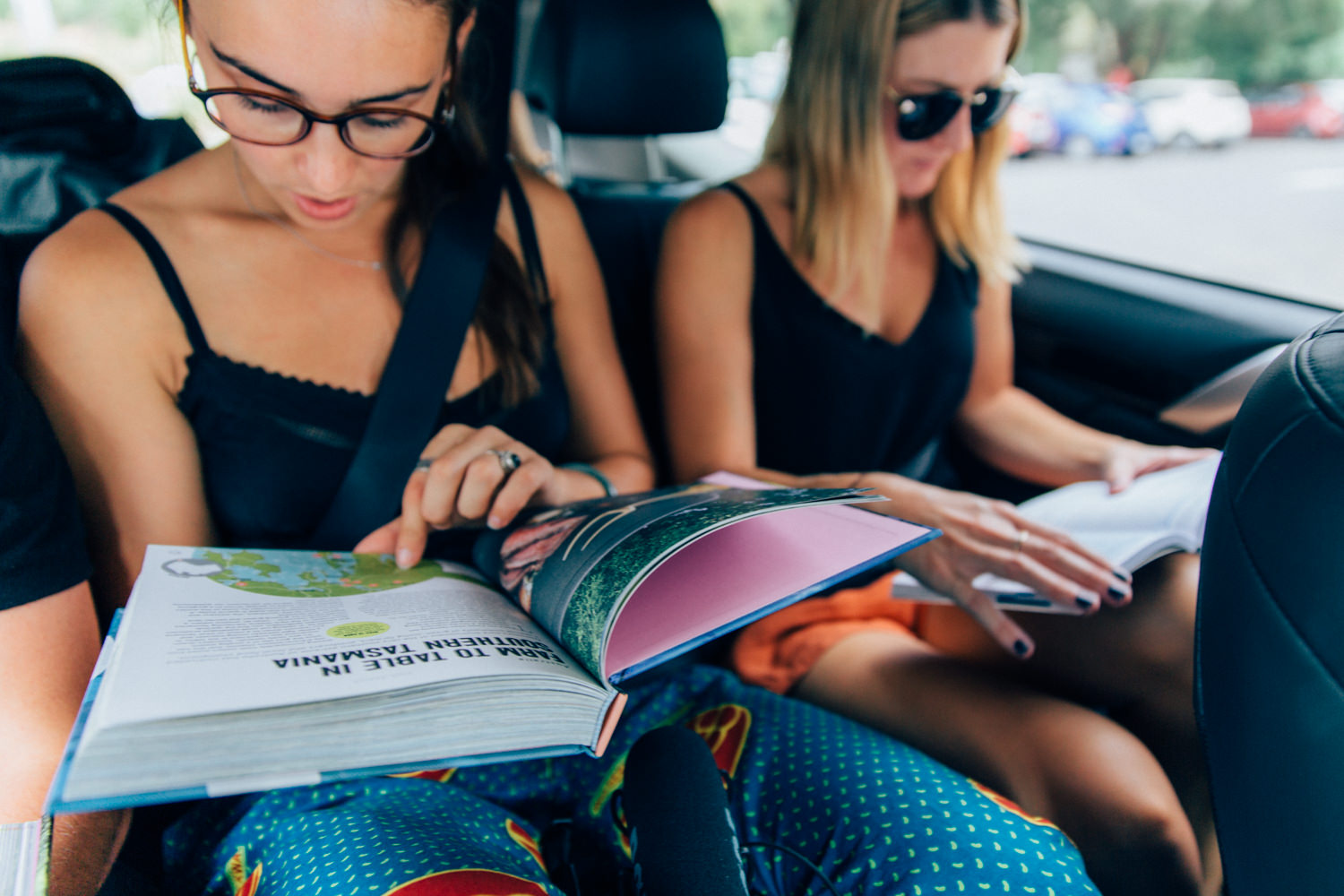 1030: Tayla, official navigator, takes us in loops of Launceston in an attempt to find the famous Cataract Gorge, a magnificent gorge apparently located two minutes out of the city centre. For such a huge natural wonder, Tay finds it unnaturally hard to find. She will not appear in this guide as official navigator again. 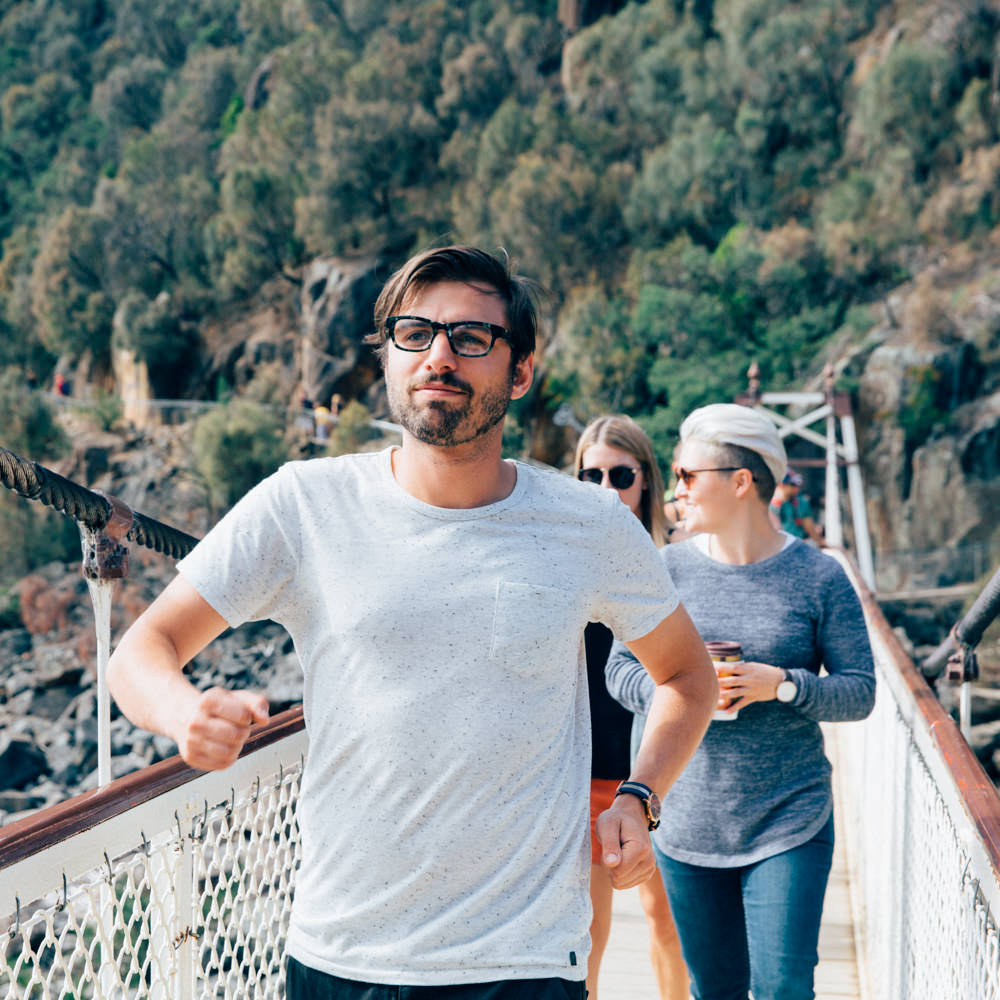 1130:  Eddie attempts to persuade the LoFos to adopt one of the many peacocks at the gorge as a mascot: “I’m sure we could take a peacock along for the ride - old mate Cocky”. Common sense and animal rights prevail. We head to Stillwater restaurant for lunch but blow the budget on a round of Bloody Marys and oysters.

Common sense no longer prevails, but hey, we’re on holidays. **

**Note: Turns out we were not, in fact, on holidays. Budget management is an extremely important consideration for all business trips. 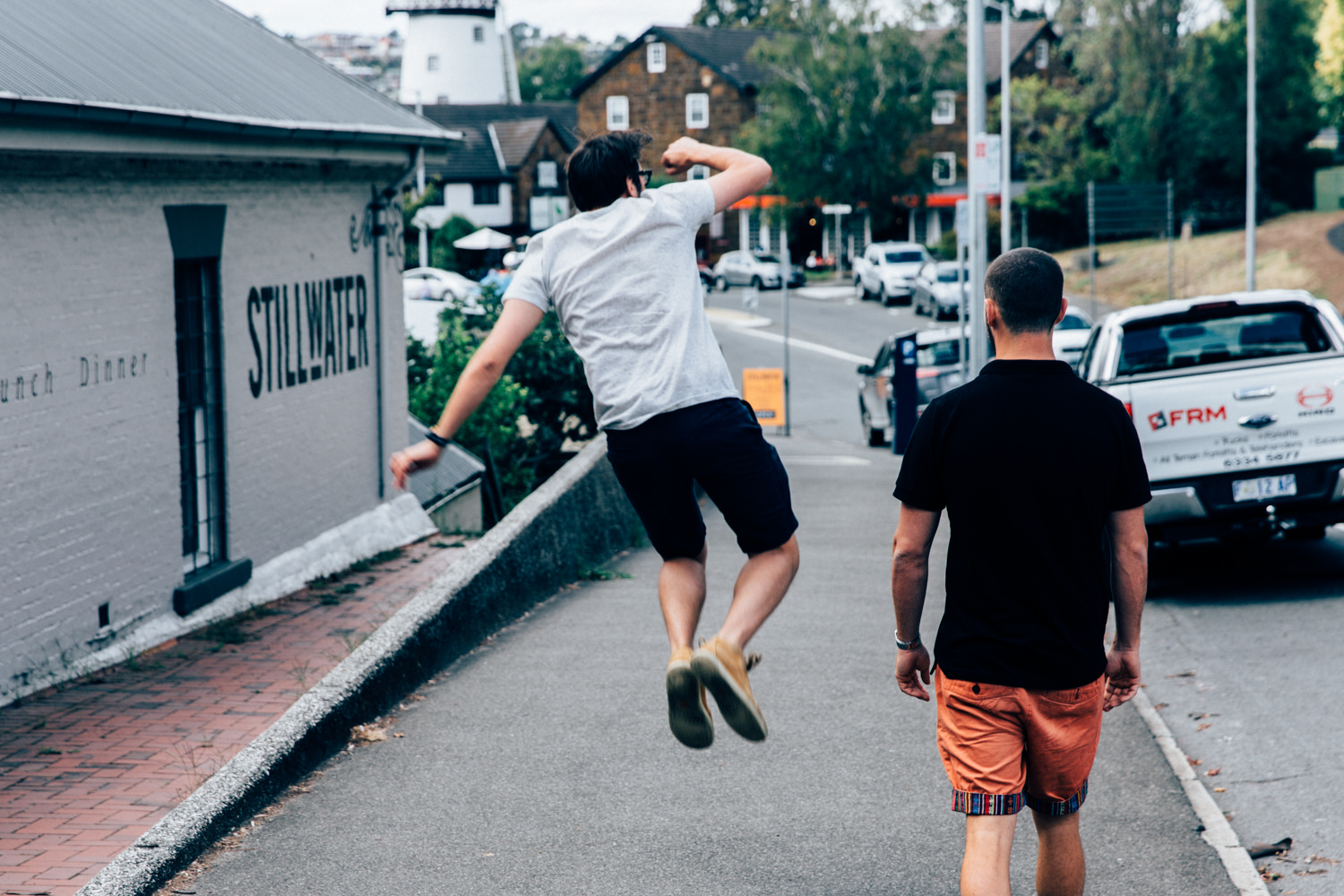 1400: We arrive at our first winery, Iron Pot Bay, and settle in on the grass with a chilled bottle of chardy. Eddie tastes crisp green apples. Pat concurs, terrified of giving his own opinion. Families eat lunch nearby under the shade of giant oak trees and the LoFos regret blowing their budget. The newly renovated cottage doubles as a cellar door and restaurant, and Chef Sam Adams’ reputation has kept the restaurant packed out since its January opening. 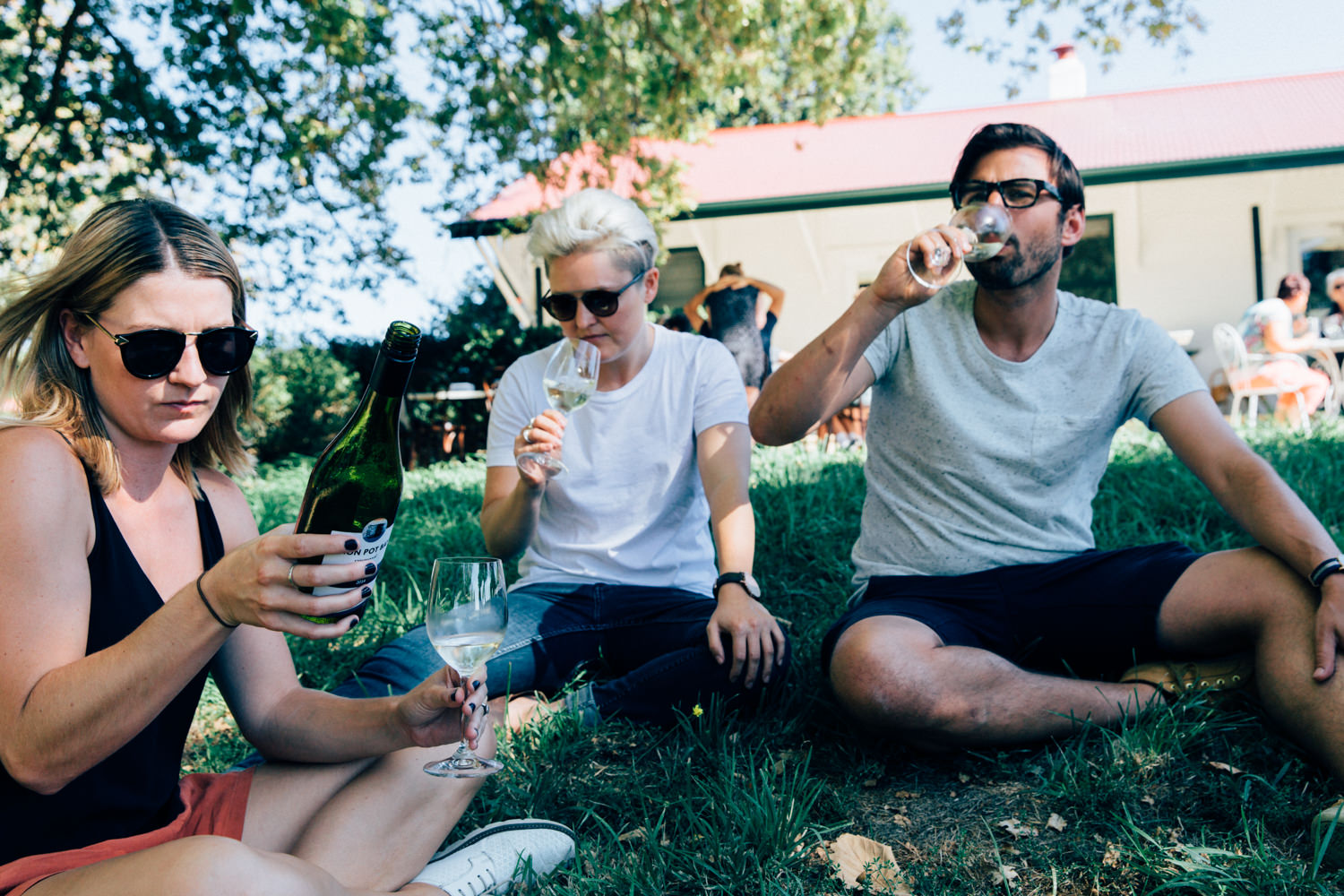 1530: We drive along the Tamar River, Boags tinnies in hand (a Tassie staple), back through Launceston towards our accommodation: the Red Feather Inn.

1645: According to Eddie, “Red Feather Inn are the OG bed and breakfast around here.” Though his sources remain nonexistent, it turns out he’s 100% correct. We’re in Murphett’s Cottage, built as a Georgian officer’s quarters, and it’s nicer than any of our houses. There’s room for eight, a private deck and garden, two sitting rooms and a super cosy kitchen. It’s legit. 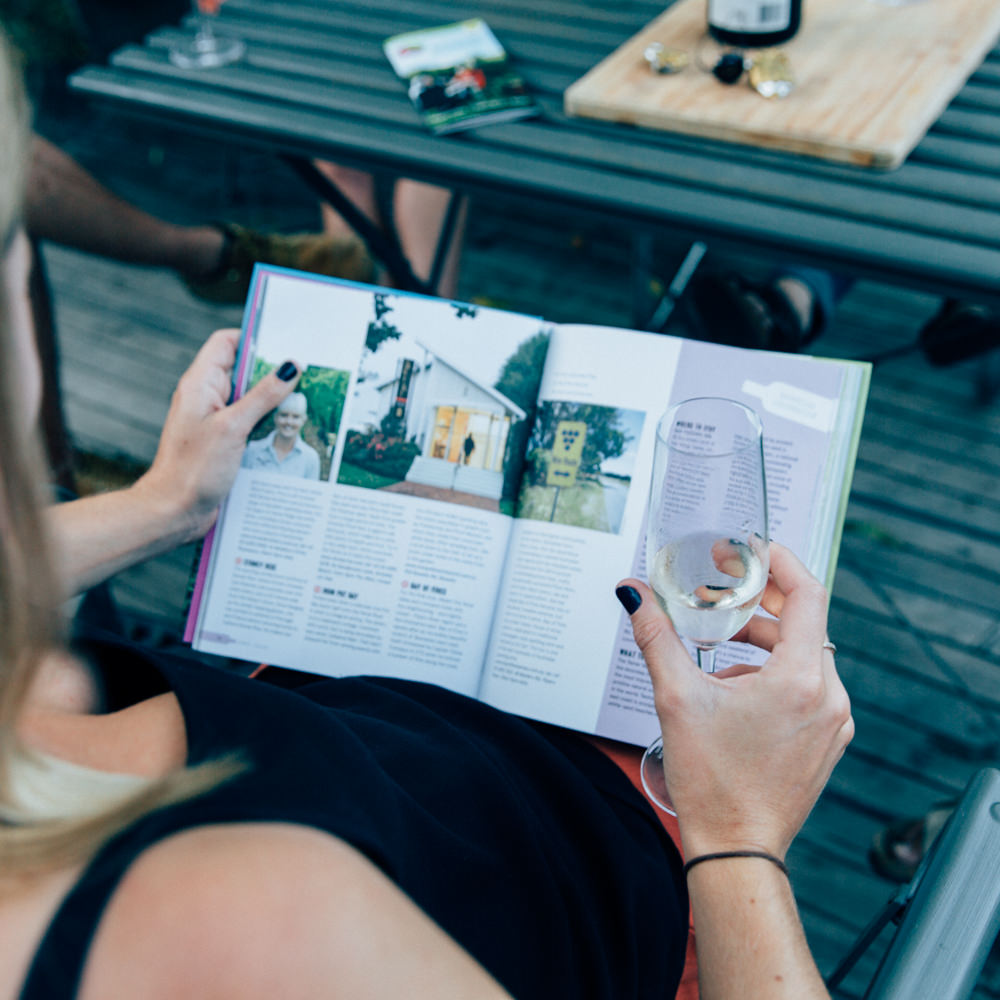 1900: We fill up on local cheese, chorizo and paté, purchased earlier from the provedore above Stillwater. Eddie confirms its quality: “I plan on doing some weird things with that paté and my sausage.” Char, on chef duties for the evening, whips up a risotto. This is followed by some heated rounds of Monopoly Cards. Oh and wine, lots of wine.

1100: Powered by ham & cheese croissants, the LoFos arrive at Bay of Fires Winery. EJ Carr, winemaker for their House of Arras label, is known as the Don of Australian sparkling and they have cemented their place as the best consistent producer of sparkling wine in Australia. They’re also doing some really cool, interesting things like a skin contact pinot gris, affectionately known as Piggy Skins. We’re into it.

1105: “Want to see the platypus?” We’re asked. Duh. We jump into a couple of utes and head through the vineyard towards their dam. In this case, dam refers to a  large, glistening lake surrounded by bushland. Will, a former canoe and nature guide, speaks passionately about Tassie’s native plant and wildlife. It’s something that will pop up throughout our trip – the local connection to, and love of, the land. 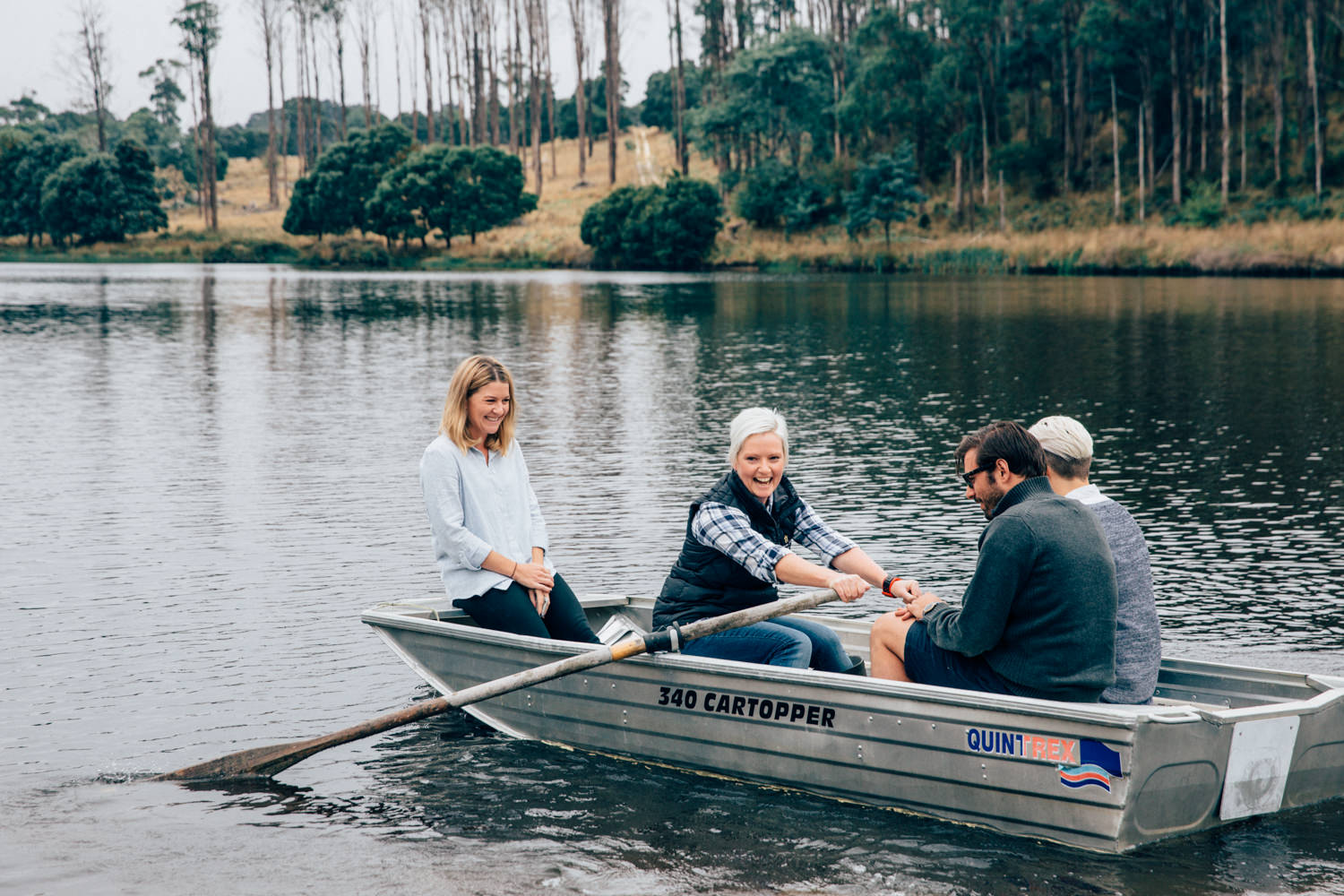 1110: Will (Cellar Door Manager) and Penny (Winemaker) pull a rowboat out of the bushes and into the water. Char is well prepared and wearing boat shoes: she jumps in with Eddie & Kate. Pat is consumed with jealousy. They end up seeing five platypusses? Platypii? An argument ensues.

1130: The platypus argument continues. The internet is consulted but no firm answer found: the suggested collective noun, however, is a ‘paddle’. The more you know. 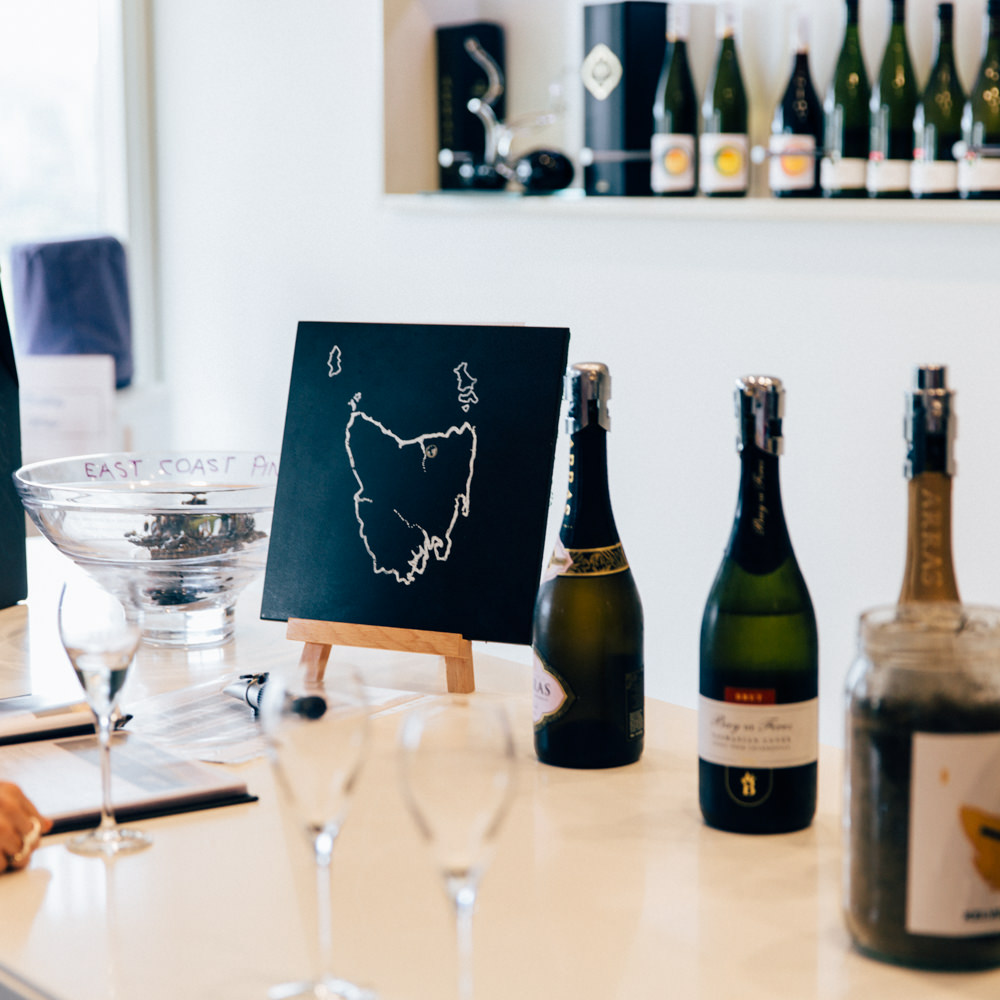 1145: Wine tasting time. Eddie reiterates how good their sparkling is. We nod, drink and agree – it’s phenomenal, especially the House of Arras Rosé Sparkling 2006, which leaves everyone speechless. We buy the poor man’s version (travel budget, ya know?), a Cuvée Rosé NV, heralding the start of our love affair with Tasmanian sparkling rosé.

1400: With an afternoon free from winery visits, the LoFos head to the beach to enjoy the sunshine. Eddie takes us down a sandy ‘road’ until we hit a downhill to the beachfront. He takes a look and, with a questionable background in 4WDing, gives Pat – the driver – a confident thumbs up. We triumphantly roll down to the beach and park. Toes are dipped; rocks are skipped; photos are shot by Kit. A great success. 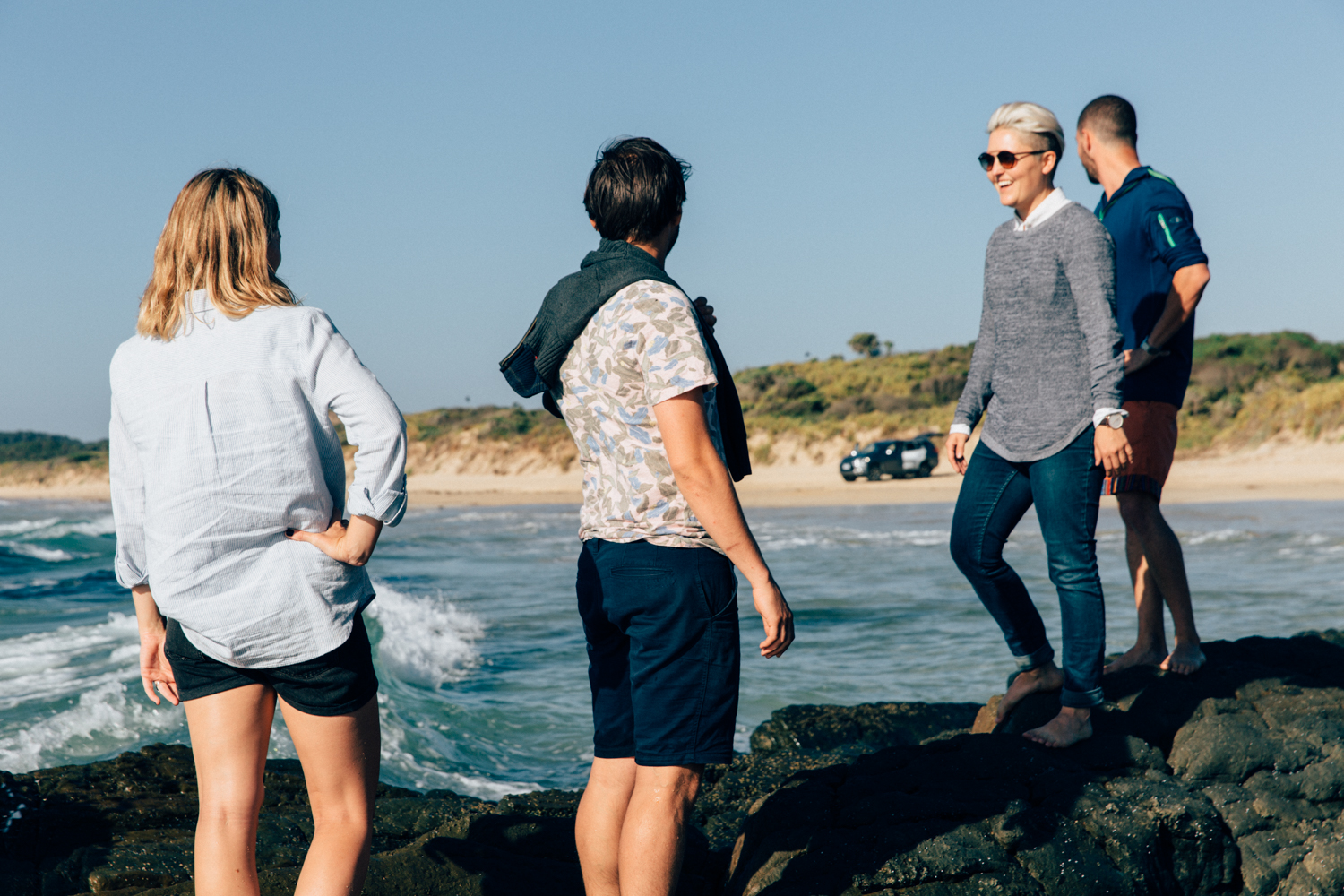 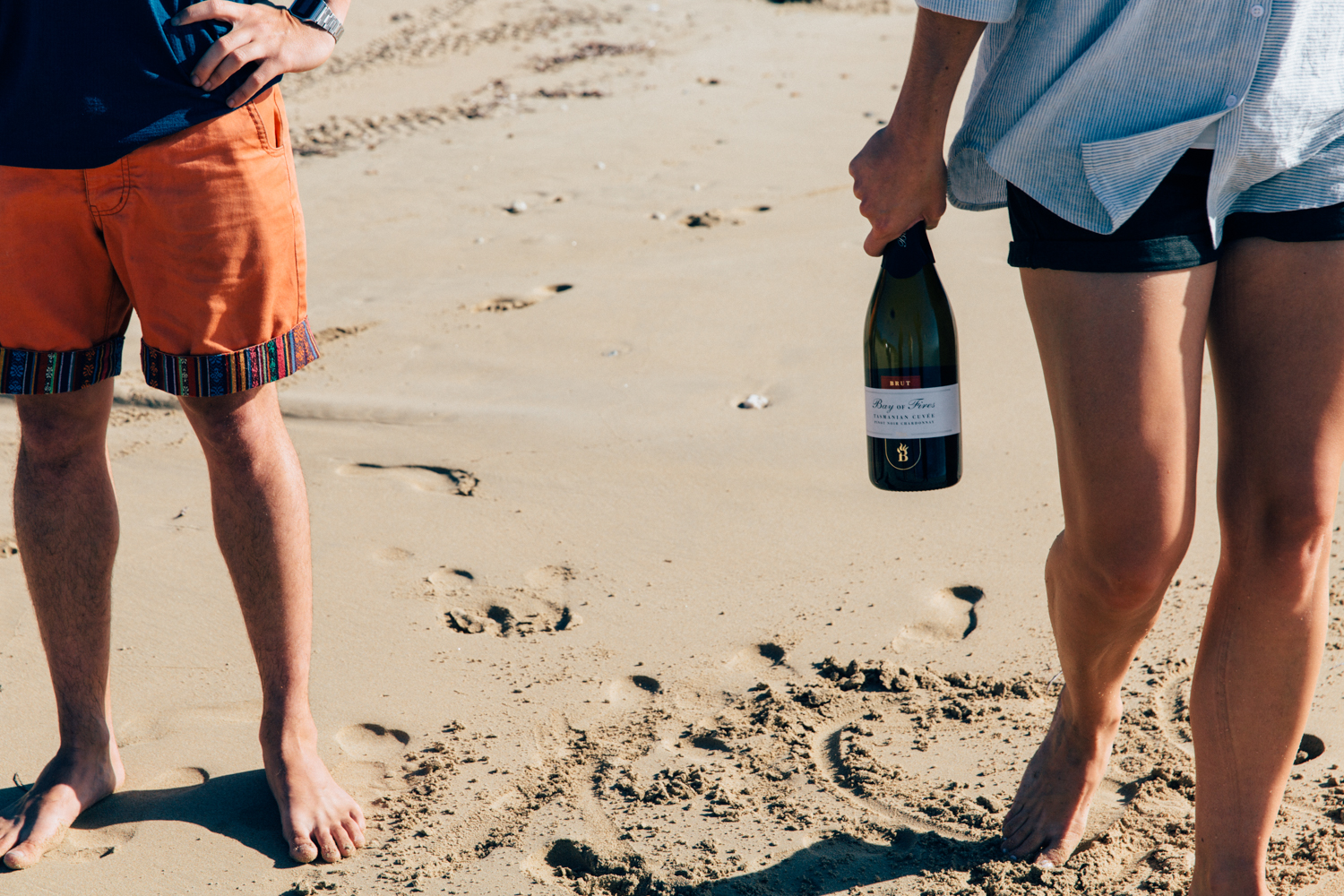 1500: Sandy, sun-kissed and happy, the LoFos jump back in the car. Pat takes off at a leisurely pace, drives five metres up the sandy slope and stops. Things make bad noises. In hindsight, a full car and cautious attitude is not conducive to driving up dunes. 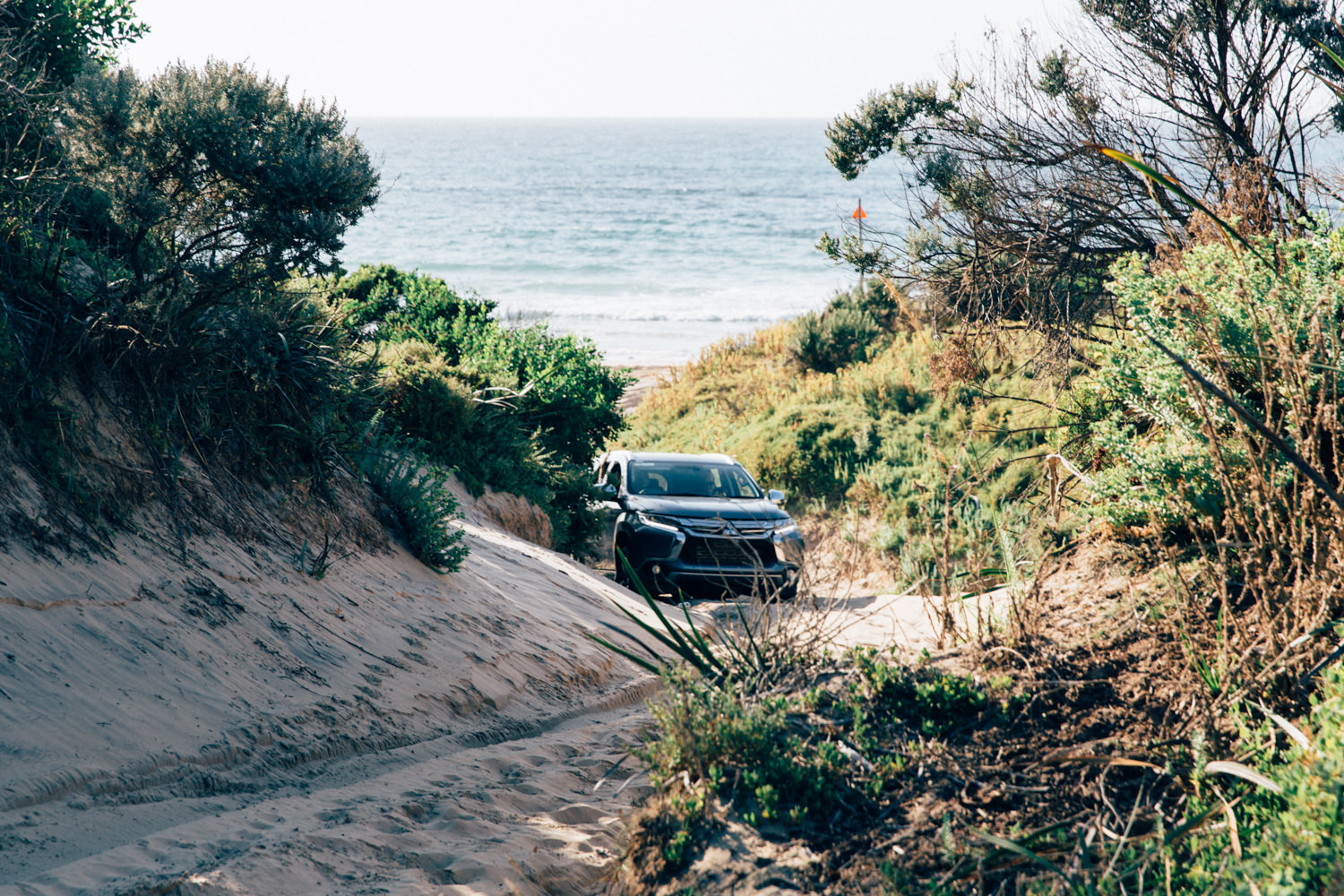 1530: It becomes apparent the LoFos may be in some strife. Kit confidently gives orders. No-one listens.

1600: Pat returns from hunting for neighbours dragging two planks of wood. Arteries clogged from cheese, he has a minor heart attack. After much digging, the planks are placed under tyres – an abject failure. Will from Bay of Fires Winery receives a distress call and promises to come help.

1605: Kate sits on the plank of wood and cracks a $95 bottle of pinot – looks like we’re on holiday again. We hold an impromptu tasting session: does the pinot taste better out of the bottle or a dirty coffee cup? The bottle wins, though there were some pleasant mocha notes present when drunk out of the cup. 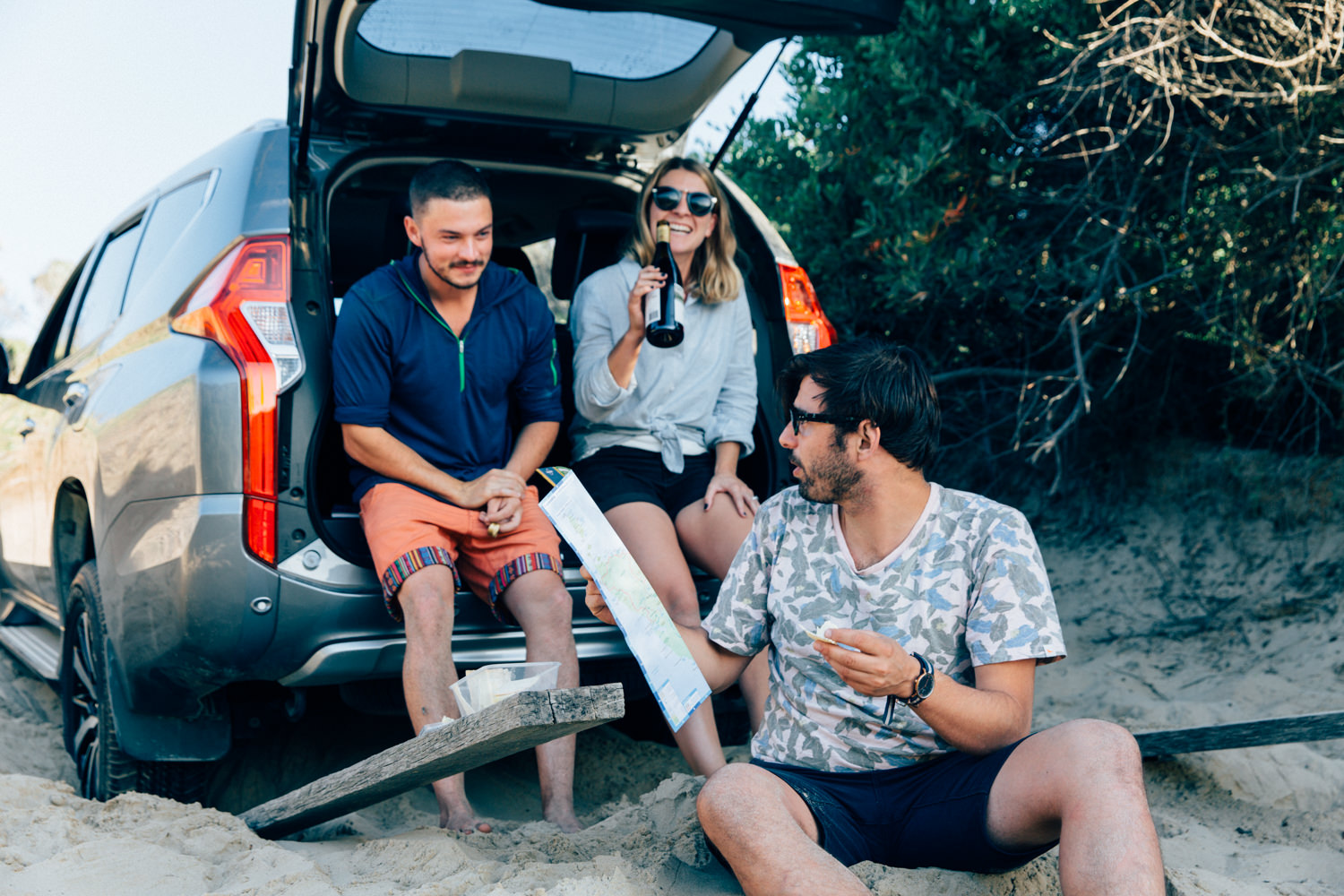 1630: Will arrives with a ute and a 6-pack of beer. Char couldn’t be happier. Bay of Fires just became our favourite winery in the world. 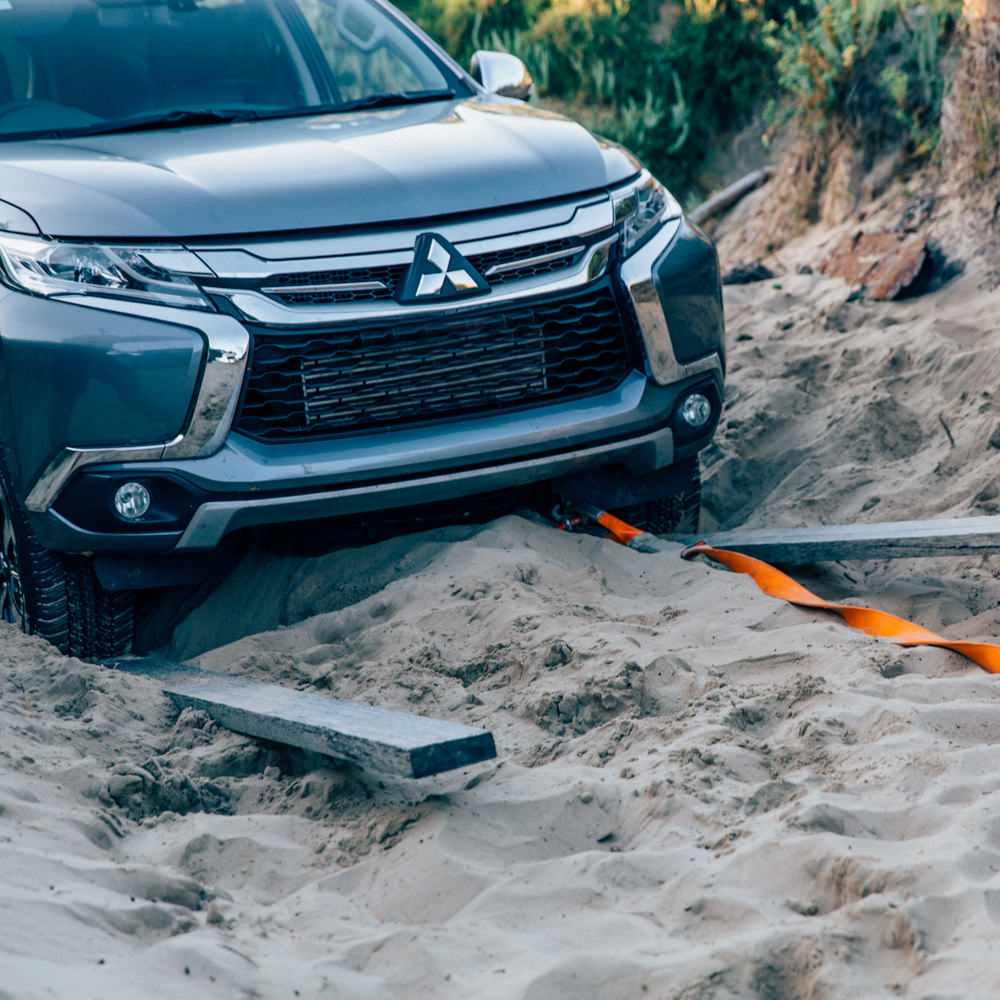 1930: After three hours of digging, pulling, pushing, looking for other exits and a sunset photo shoot in the back of Will’s ute, the LoFos escape the sandlands. They drive straight to Launny’s greatest invention: the 24/7 service-station-cum-provedore. The Red Feather Inn gives them a welcoming hug. Celebratory toasts are made, as is pasta, and the LoFos rest. 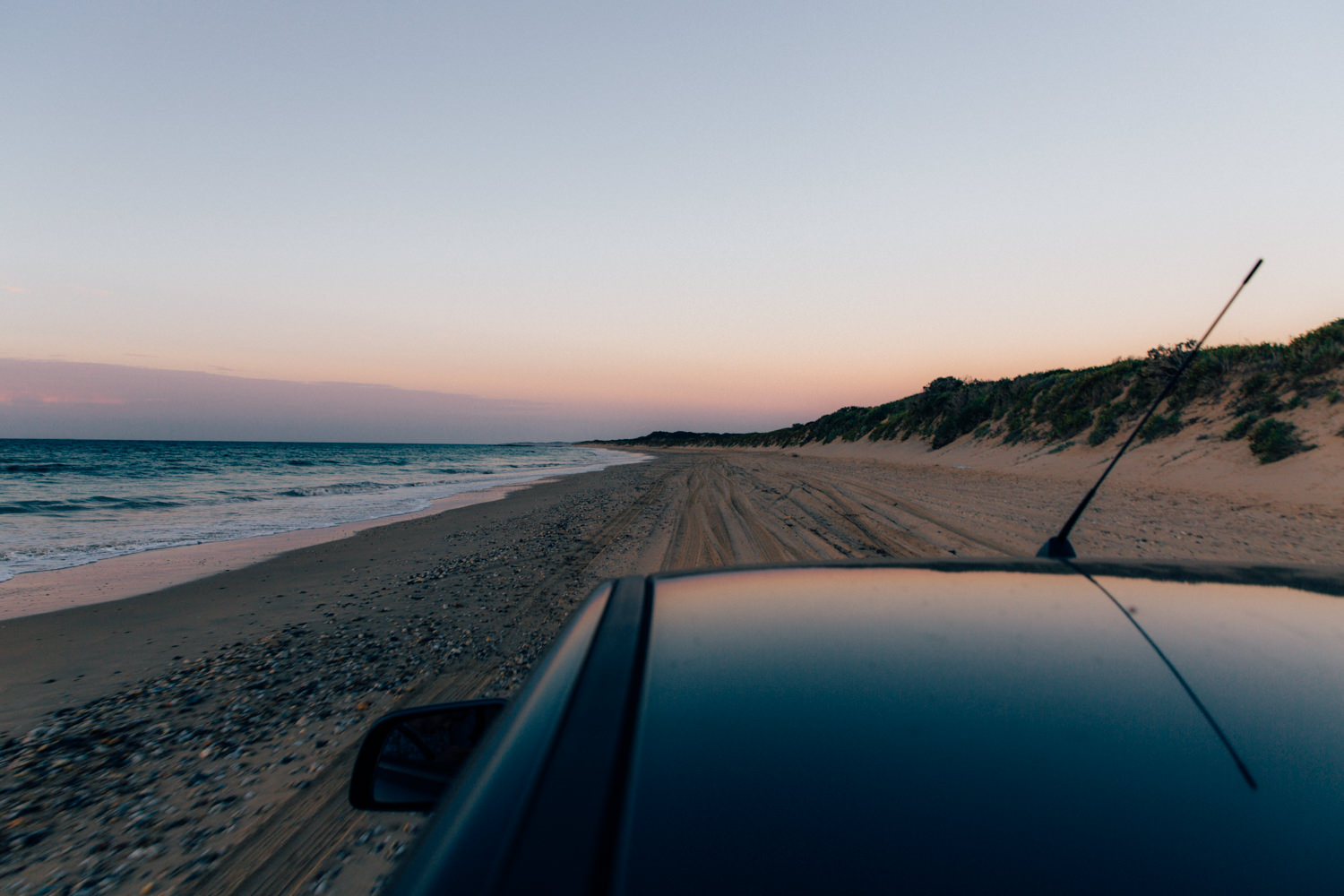 1030: The LoFos arrive at Josef Chromy wines after a restless night haunted by sand and rental cars. They’re taken through the cellar door and past the huge lake, where fly fishing lessons are run, to the production area to meet Jeremy, General Manager and Head Winemaker.

1100: Jeremy explains the unique challenges of the Tassie wine industry: “we need to be self-sufficient and have one of everything, and maybe a spare, otherwise you’re pretty much screwed.”

1105: We see firsthand that Josef Chromy do, indeed, have one of everything. And maybe a spare. They do everything here, from picking to bottling, and our expert consensus is that they are not screwed. 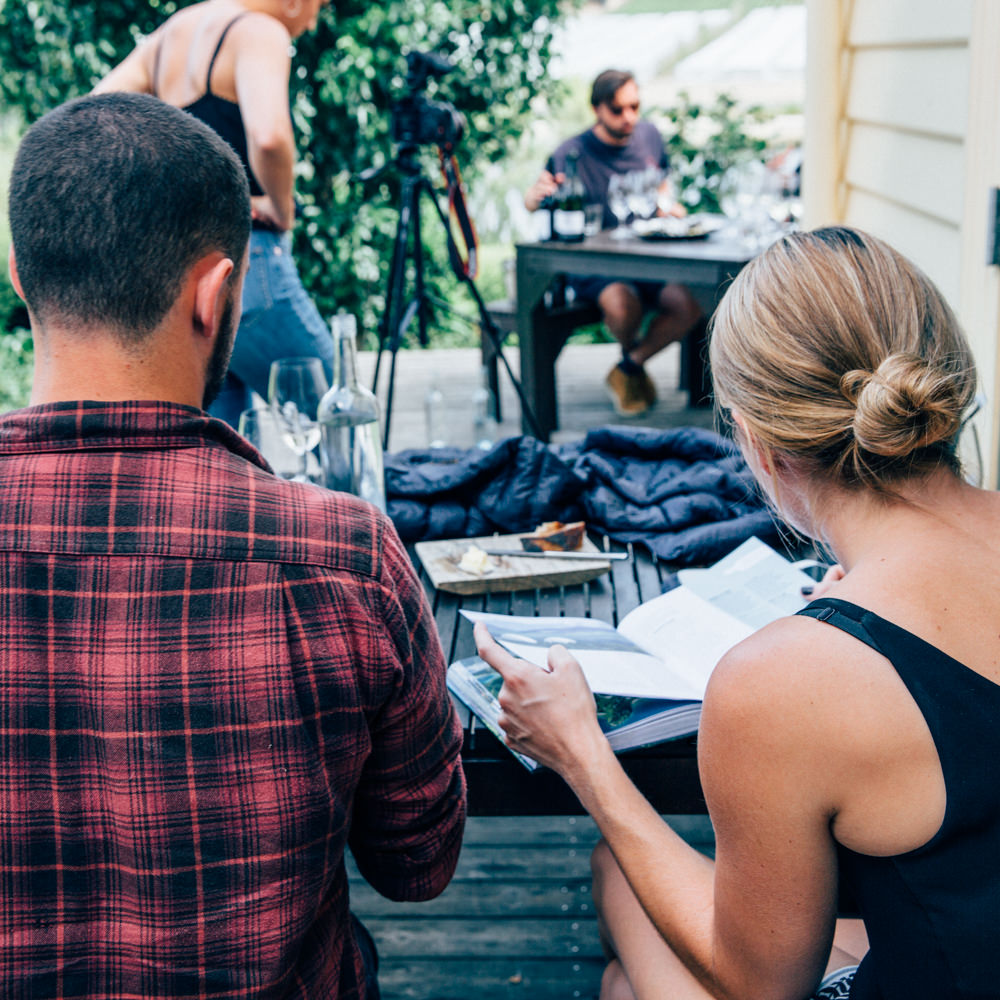 1200: We meet Jeremy post-tour at the onsite restaurant. Eddie & Char taste wines and eat oysters with him. Kate & Pat, the understudies, sit behind the cameras eating complimentary bread.  Unlike the chardy dominant sparkling from Bay of Fires, Josef Chromy’s bubbles are all about pinot, giving them a more strawberry-centric vibe.

The pinot is one of the most consistent in Tassie, whereas the chardonnay is quite varied. Jeremy loves both richer and lighter styles and prides himself on having a chardy for everyone. Hot tip: if you can get your hands on a bottle of the riesling, don’t hesitate. It was a very welcome, delicious surprise.

1245: Wine tasting turns into an extended lunch. The restaurant is booming on a Tuesday afternoon (it’s seriously good, having recently hosted Alain Passard, the #1 chef in the world as ranked by Le Chef Magazine in 2016). The LoFos fall in love with their beef carpaccio. And order a second bowl of fries. 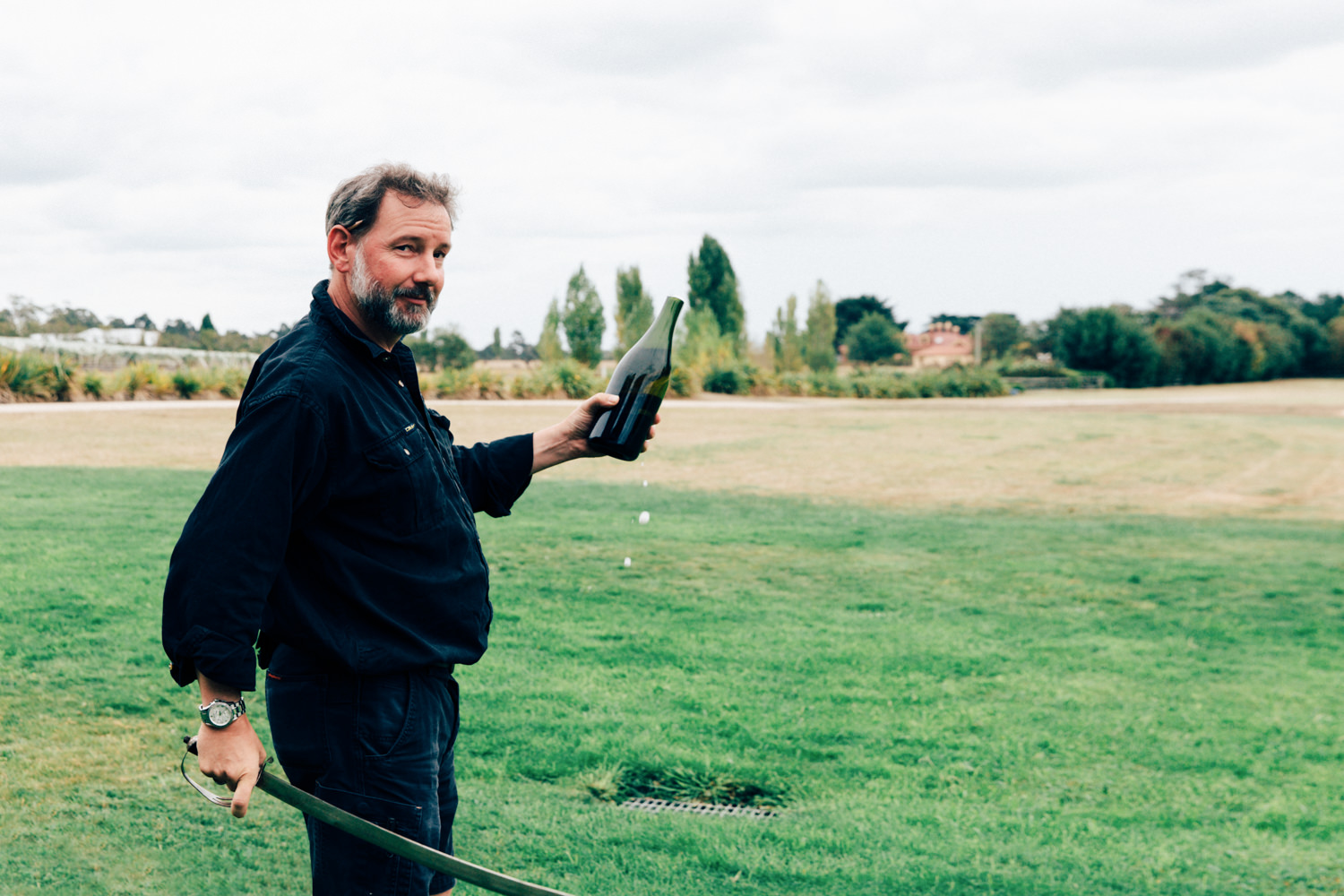 1400: We meet Jeremy back at the production area to cut the top off sparkling wines. Sabring, it’s called. Jeremy produces a sword, naturally, and swashbuckles the hell out of it. Pat goes next – he closes his eyes, prays and succeeds – an alcoholic’s Johnny Depp. 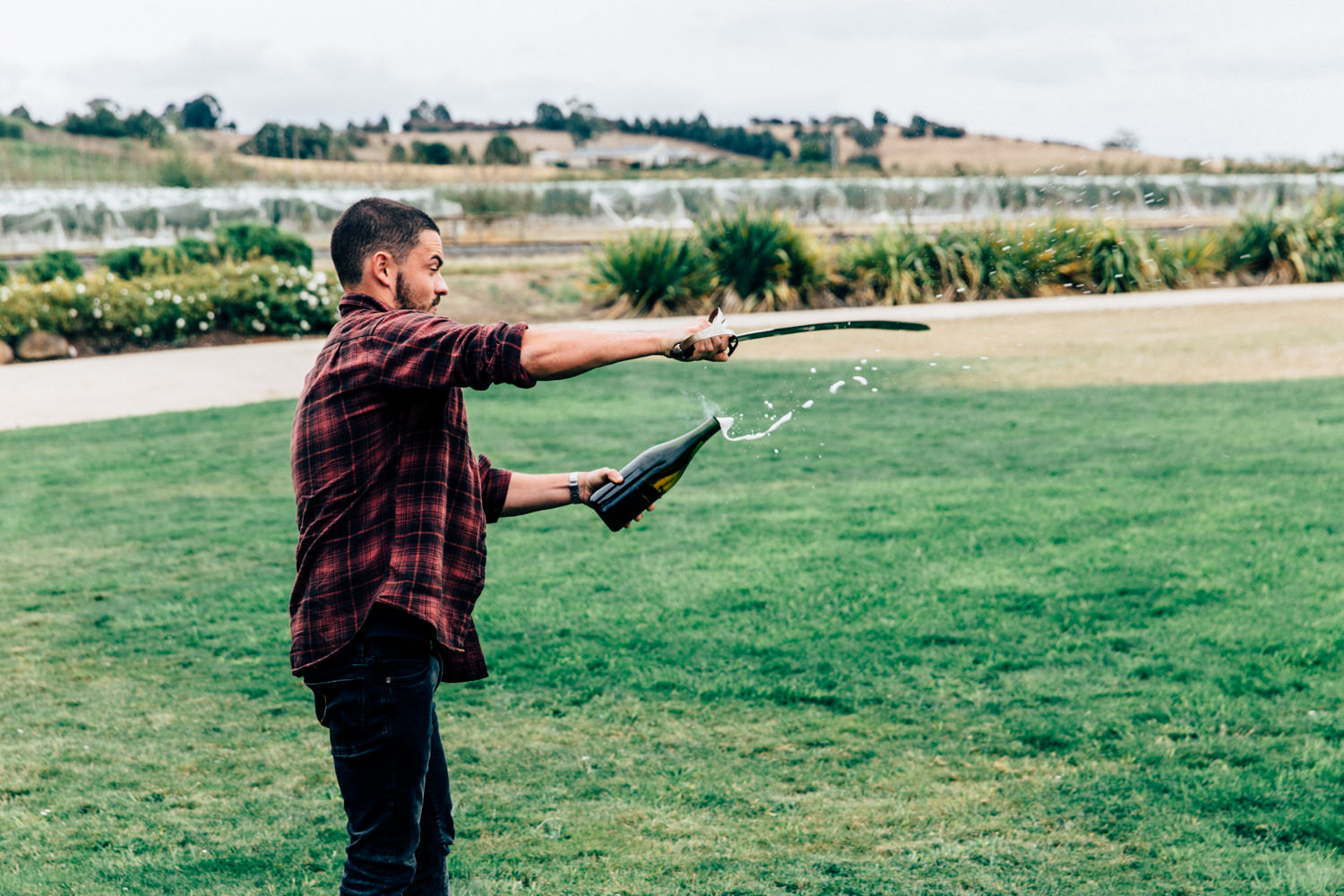 1505: With a notebook and pen in his shirt pocket, Joe swirls his glass of pinot and takes a sip. He nods, excuses himself and pulls Jeremy away to talk business. We feel like children in front of this 86-year-old legend. 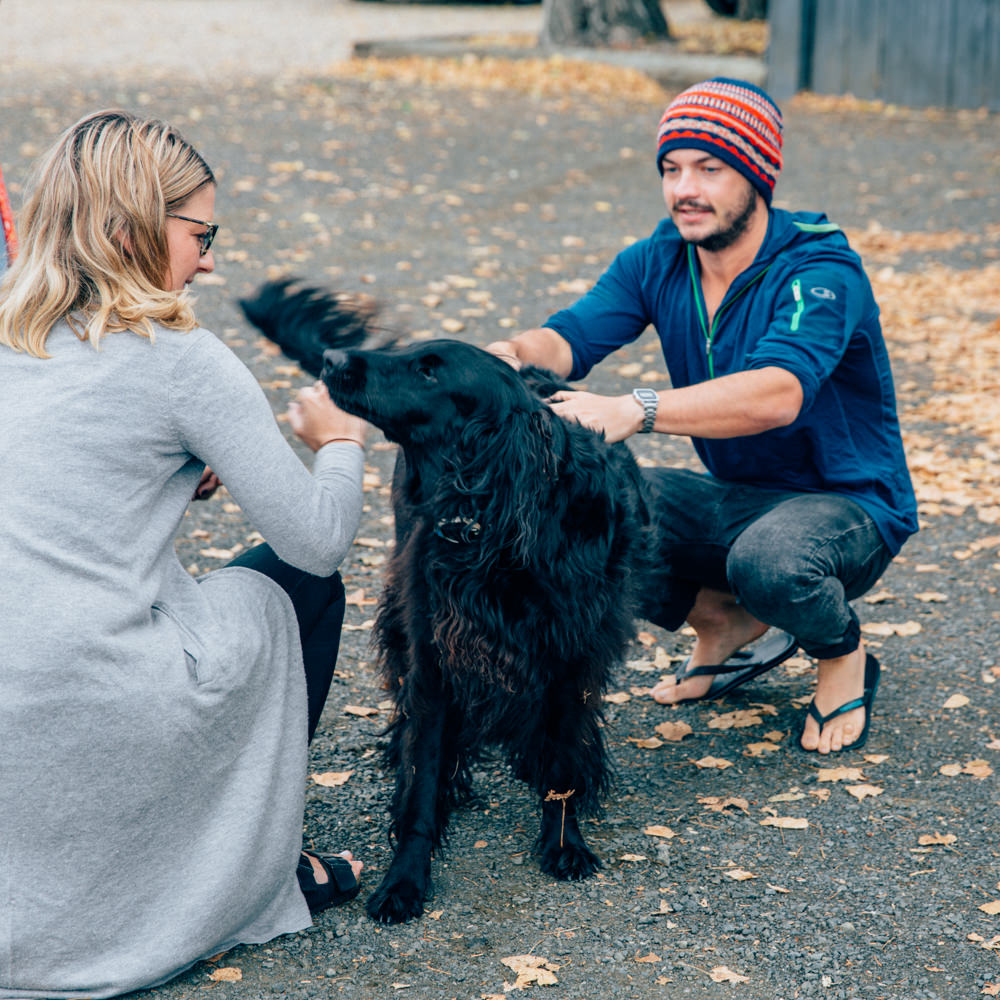 1000: We arrive at Velo Wines to meet Mary and Michael. Beau, their overly friendly dog, humps our legs into submission. We later find out she likes to dominate “dog people”. We feel used. And flattered.

1015: With Beau satisfied, we move to the cellar door with Mary. Michael hasn’t arrived yet as he’s out riding bikes. FYI, he’s an ex-Olympian and used to ride the Tour de France, hence the name Velo. Mary pours out some tasty vinos, including a ridiculous 2013 reserve cab merlot (one of her favourite vintages). She tell us “when you’re a small vineyard each vintage means so much to you. Each one has so many memories attached to it.” 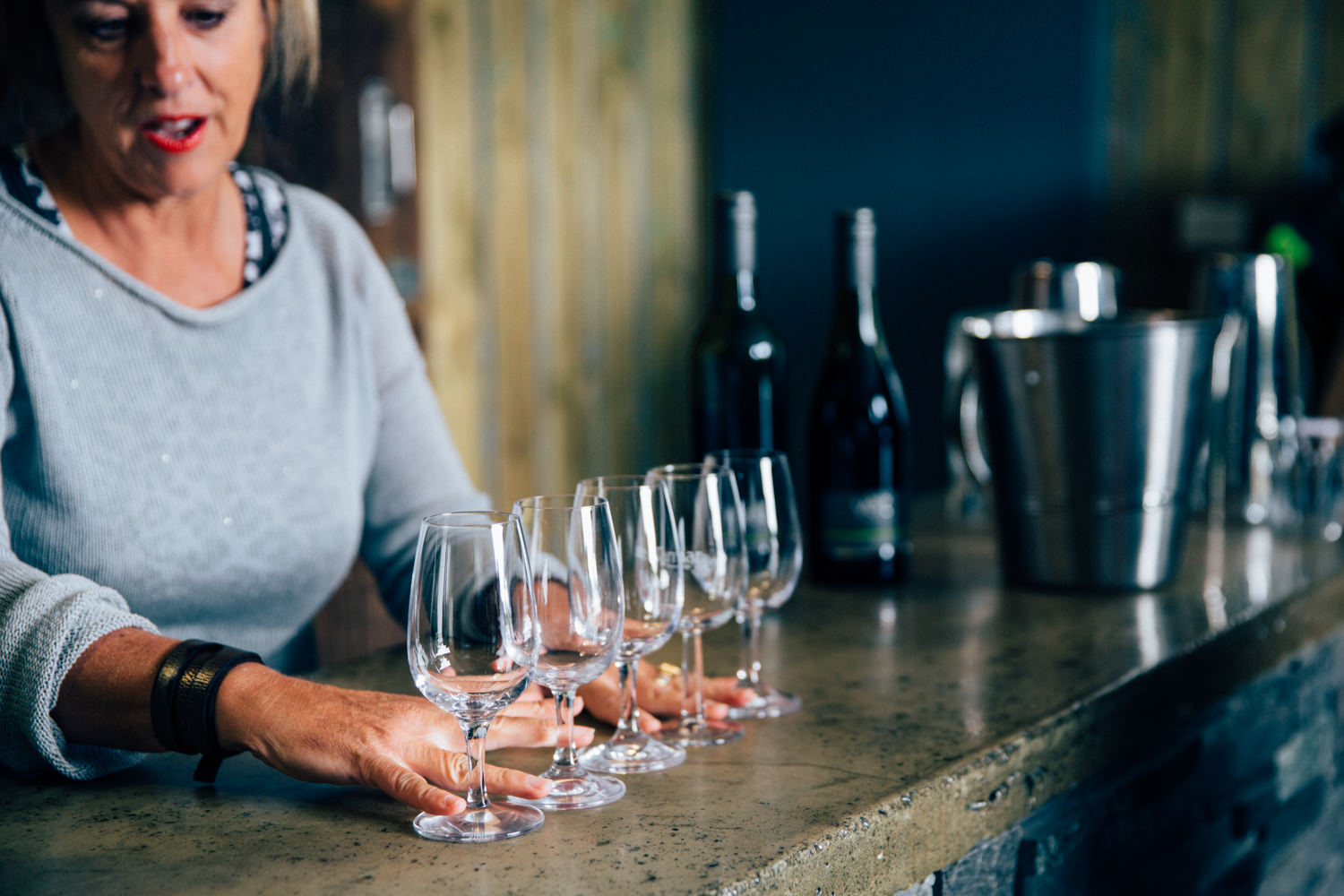 1030: Michael arrives. He pretends he doesn’t love Beau. He does, but luckily not as much as Beau loves us. He tell us “winemaking is easy, it’s just about the quality of fruit. Winemakers get a lot of credit but it’s the people in the vineyard who are doing the hard yards.”

1045: Matt, the chef next door at Timbre, is firing up the wood oven. Not only does he cook everything over flame, but he also gives locals official ‘Timbre Dollars’ if they bring in fresh produce. These dollars have Matt’s face on them. It’s kinda weird, but kinda awesome, and very Tasmanian.

1105: It’s time for these Lonely Mofos to get back home. But first, we’ve got three tonnes of sand to clean outta our car. 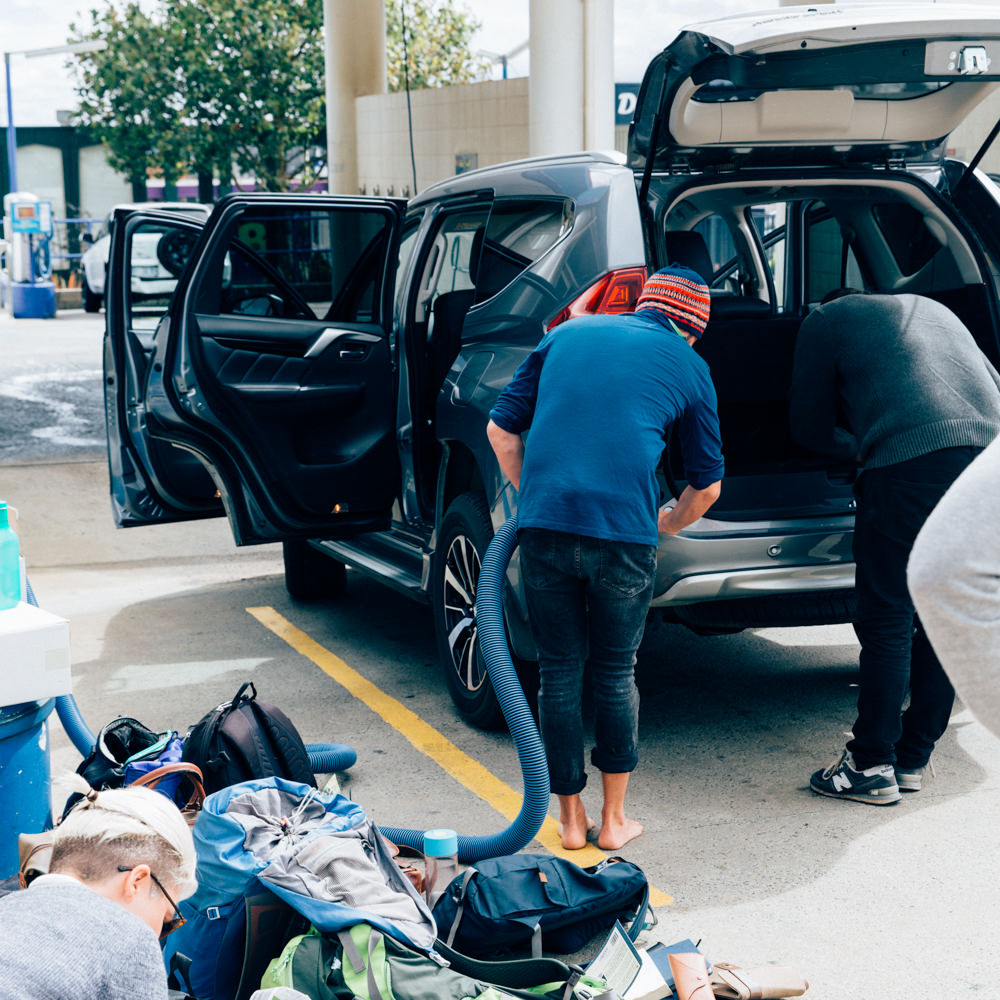 If you’re after a wine trail without wank or pomposity, the Tamar is the trip for you. From winemakers to waiters to the servo attendants decked out in suit pants and tie, you’d struggle to find a more friendly, welcoming and down-to-earth bunch of locals. The wines reflect that. Honest, quality examples of delicious vino that have fought for their place as some of the most exciting wines coming out of Australia and won.