The wine beginner’s guide to fizz

By Nikki Michaels
about 3 years ago
5 min read

Here, we offer a basic guide to the different kinds of sparkling wine, helpfully broken down into regions. Get ready to branch out, mofos! 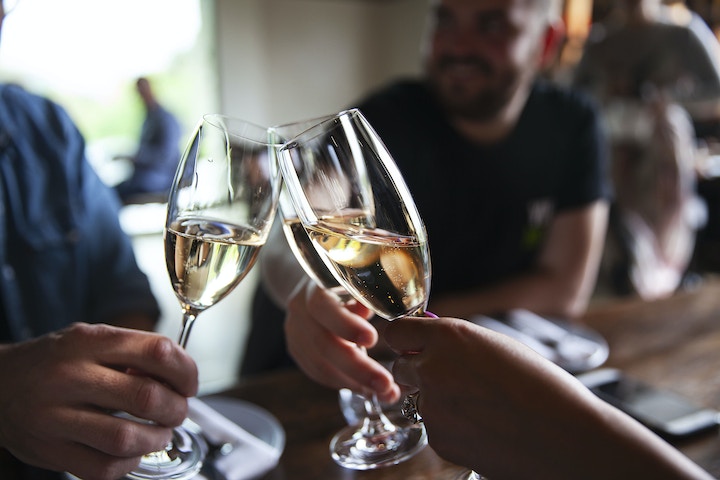 Often used broadly and erroneously to refer to all sparkling wine, Champagne is technically only allowed the moniker when the grapes are grown in the Champagne region of France and then, in the same region, crafted into vino using méthode Champenoise (aka méthode traditionelle, aka the traditional method).

In méthode Champenoise, the wine undergoes primary fermentation as normal and then begins its journey to bubbles with an in-bottle secondary fermentation, jumpstarted by adding a combination of sugar and yeast known as liqueur de tirage.

It’s made from three grapes (chardonnay, pinot noir, and pinot meunier) and is commonly chalky, dry, and smooth, with trademark notes of freshly baked bread, toasted nuts, lemon, and apple. It’s also on the pricey side thanks to its history, prestige, and production restrictions. 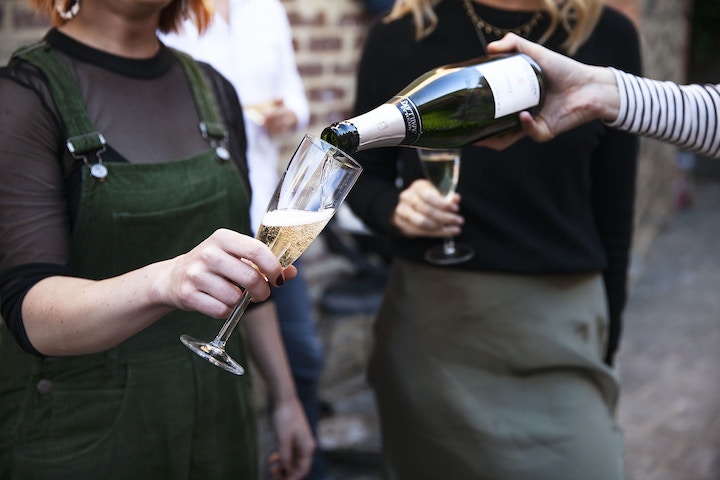 Another fizzy French beauty, crémant wines are crafted in certain officially designated regions and essentially refer to any of the country’s méthode traditionelle sparkling wines that aren’t Champagne. Fun fact: Producers outside of Champagne must use the ‘traditionelle’ term rather than ‘Champenoise.’

Since each crémant-producing area has its own set of rules and regulations, the wines themselves vary — but the grapes are always hand-harvested, the vino’s always made using the traditional method, and it’s always aged for at least twelve months (nine of them on lees) before being released.

Pétillant-naturel, or pét-nat for short, is like the Big Bang of winemaking. Made using méthode ancestrale (or the ancestral method), it came into being long before Champagne and méthode traditionelle and has recently enjoyed a resurgence in the wake of the worldwide natural and organic movements.

Unlike the traditional method (in which the wine sees two fermentations), pét-nats go into bottle during primary fermentation, where they complete the process. It’s a somewhat risky winemaking technique in that the vintner has zero control over how the wine turns out once it’s gone into bottle — and as a result, no two pét-nats are the same.

Pét-nats can be made from any varietal a winemaker desires — and though they originated in France, they’re now crafted and quaffed all over the world.

The German word for sparkling wine, ‘sekt’ refers to bubbles made in Germany and Austria.

Rather than utilising the traditional method, sekt wines are made using the Charmat (or tank) method — just like in Italy’s Prosecco, which we’ll get to in a minute. As in méthode traditionelle, the Charmat method involves a primary and a secondary fermentation, but the secondary fermentation happens in stainless steel tanks rather than in-bottle.

Commonly used these days as a cheaper and less labour-intensive alternative to méthode traditionelle, the Charmat method swaps the microscopic bubbles of Champagne and its traditional brethren for bigger, punchier bubbles that are a bit more bouncy and lively.

Sekt wines generally skew dry to medium on the sweet spectrum, and they’re often made from riesling in Germany and grüner veltliner in Austria. 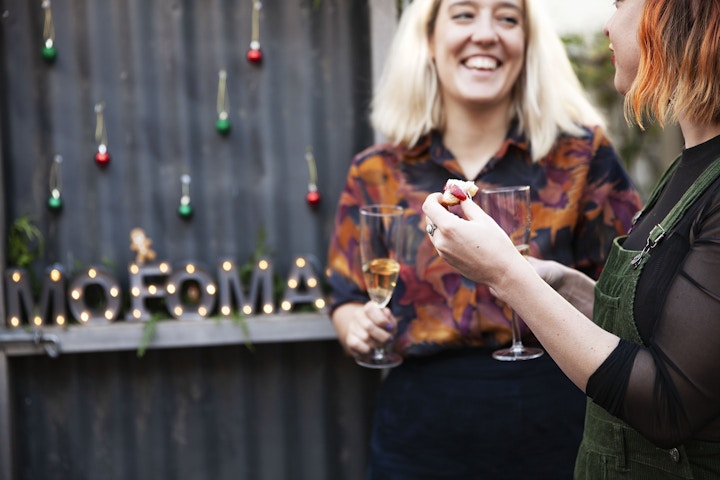 Made using the Charmat method we described above and named for the Prosecco village in Italy, Prosecco wines comprise the glera grape and are typically dry, bright, and delightfully aromatic, with pronounced notes of fresh citrus and melon.

Prosecco’s less fruity brother Franciacorta comes from the Italian region of the same name and is made with chardonnay, pinot noir, and pinot blanc. It opts for méthode traditionelle over the Charmat method and is generally very dry and more nutty and biscuity (think cashew, almond, and vanilla bean) than Prosecco.

By law, Franciacorta must be aged on lees for 18 months — which we’re not complaining about, since it adds a hell of a lot of texture and complexity.

Once known as Asti spumante (the latter word meaning ‘foaming’ in Italian and generally referring to all Italian bubbly), Asti wines take their name from the Asti region in Piedmont. They’re made from the famous (or infamous, depending on your perspective) moscato grape and crafted using a modified version of the Charmat method that’s come to be known as the Asti method.

In the Asti method, the chilled must of the moscato (or muscat) grapes is fermented in a pressurised tank, trapping carbon dioxide in the wine throughout the process and therefore producing bubbles.

Typically frothy, smooth, and peachy, Asti wines (of which the well-known Moscato d’Asti is probably the most famous) sit on the sweeter end of the spectrum thanks to the muscat grape, which itself is a naturally sweeter varietal. 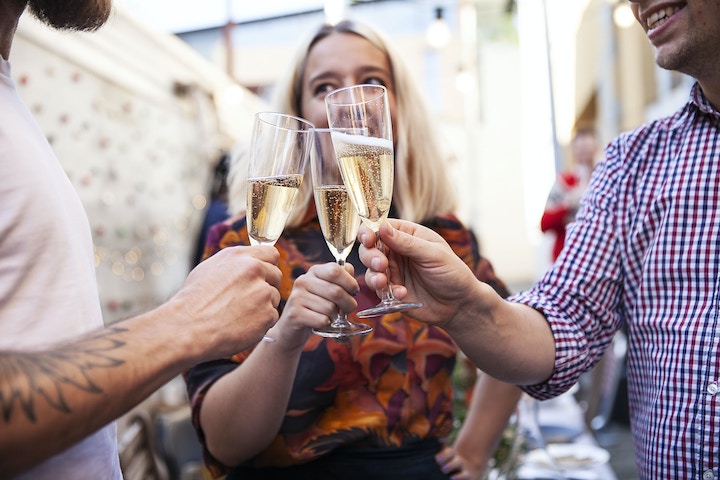 If you’ve ever heard of Lambrusco, chances are it probably wasn’t the most glowing review. This Italian sparkling red (!) has a less-than-ideal reputation as blousy and too sweet — but the good news is that that’s mostly B.S.

In reality, the strikingly hued Lambrusco (most of which is made using the Charmat method, with an occasional méthode traditionelle outlier tossed into the bunch) is bright, punchy, and deeply aromatic, with juicy red and purple fruit flavours and a refreshing finish.

Legally, cava must spend at least nine months on lees and be between 10 and 13 percent alcohol. And like most of its non-Champagne siblings, it’s excellent value for money. 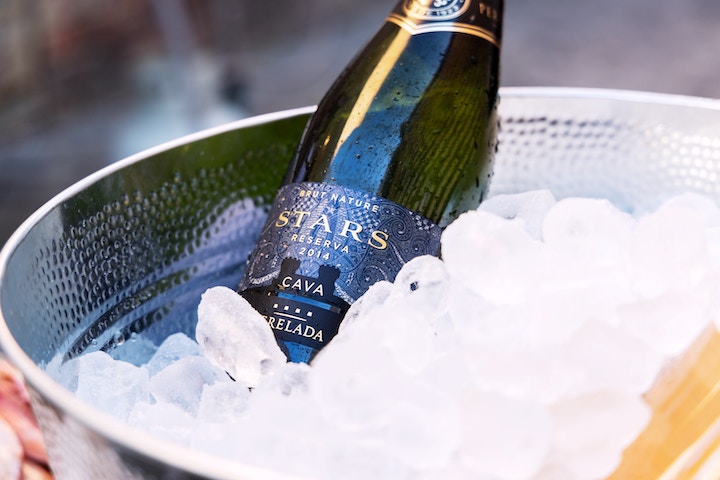 Feeling thirsty? Stock up on quality bubbles from Australia, France and beyond here.